Dr. Woodrow Juniper "Woody" Strode (b. 1954) is the coroner operating at the SBPD from Season Four onward. He is portrayed by Kurt Fuller.

Woody works as the Santa Barbara Police Department's corner and he has appeared many times since 2009, but he figures prominently in Season Six. He even goes on a bender with Shawn, Gus, and Lassiter ("Last Night Gus"). He's a bit strange, often agreeing with Shawn and Gus's crazy theories, like vampires as the cause of death. He was in the All Coroner's League. Woody is also very quirky, using strange examples and making comments and morbid jokes that even Shawn is slightly disturbed by. His wife cheated on him twelve times; the known instances are with her personal trainer, White Sox slugger Harold Baines, and a cabbie from Khartoum named Matak. He is wanted in the Philippines for unknown reasons. Despite being disturbing and making strange comments (for example he once proposed that a woman died of smallpox only to find out that it had been eradicated several decades previously), he seems to be good at his job.

In "Autopsy Turvy", Woody begins a romantic relationship with Grace Larsen, a former flame and a mortician who helps Woody with a case. At the end of the episode, it is revealed that it was Grace who was the murderer, and she wanted to be thought of as good as Woody. In this same episode, it is revealed that Woody may have a crush on Karen, as he asks her if she was currently seeing anyone, and then when she tells him she's married with a child he says he guesses she'll only, "be the chief of doing (him) in (his) dreams!" Woody begins a relationship with Ursula, Marlowe's parole officer and lover of Carlton after a one-night stand after Juliet gets them together to help Carlton and Marlowe live together in their own home. Woody stated that they were both what each other was looking for.

Some time after the events of The Break-Up, Woody was given the job as Head Medical Examiner for the State of California. However, it is clear that he didn't last very long in that gig when Shawn and Gus meet him in San Francisco during Psych: The Movie as an assistant coroner to Butterfly McMillan. She explains he was fired for closing up a cadaver with a chili dog in the chest cavity, but Woody insists it was rather the fact that he opened the cadaver back up in order to retrieve his lunch that got him fired.

"I cannot thank you enough for believing in me!"
— Woody Strode (from Autopsy Turvy) 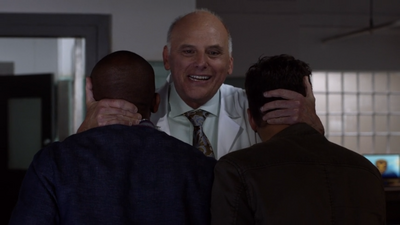 The gallery page for Woodrow Strode can be found here.

Retrieved from "https://psychusa.fandom.com/wiki/Woodrow_Strode?oldid=38792"
Community content is available under CC-BY-SA unless otherwise noted.