Shawn (and Gus) of the Dead

"Shawn (and Gus) of the Dead" is the sixteenth and final episode of Season Two. Shawn is called to the Natural History Museum when a mummy goes missing and all indications are that it got up and walked out on its own.

In 1987, Henry and Madeleine are up late watching a horror film. Maddy then goes to get something to drink. Henry catches Shawn watching the film as well, and the boy says he is too scared to go back to sleep. Henry tells him that people don't come back from the dead and instructs him to go back to sleep.

It's four a.m. and an alarm is going off at the Santa Barbara History Museum. Lassiter and Juliet rush in to find that the mummy from the exhibit that opened yesterday is missing, along with Douglas Hastings, the night watchman, who it turns out has a criminal record. That, combined with the fact that the mummy, along with everything else in the museum, is of so little monetary value that the board of directors keeps postponing the overhaul of the security system, leads Lassiter to conclude this case isn't worth his time. He's been in the papers lately, because he's been trying to prove that the death of wealthy philanthropist William Wyles III was no accident, as was originally thought. He tells Juliet to put out an APB on Hastings' car, and goes to leave ,but Sophie Morris Bridgewell, the assistant curator, insists there's more going on. The alarm was triggered from inside the museum, and although the security isn't top notch, nowhere on any of the footage does the culprit or the mummy appear. She thinks there's something potentially supernatural going on, and she wants the paleo-sleuth who discovered Zippy the Dinosaur on the case. For once, Lassiter is happy to oblige. So Juliet calls Shawn, who is awake and in the middle taking pictures of a married man having an affair outside a cheesy motel. He finishes that and comes straight down to the museum, where he sees fingerprints on the inside of the glass mummy case, and footprints leading away from the exit door. There is something weird going on here, he tells them. The mummy got up and walked out.

At the station, Interim Chief Karen Vick announces she will be leaving soon. She gave the mayor a time frame to take the "Interim" off her title and that deadline has passed. Shawn tells her he has a feeling it will all work out, then heads to the Psych office to review the security tapes from the museum. Actually, security tape, singular. All the cameras rotate on one feed but even so, it seems that one can't leave the museum without being caught on camera. He and Gus head down to see if there's any way to beat the camera, but when they get there, Gus refuses to go into the mummy room - curses. So he mans the security camera room as Shawn tests his theory. Gus catches him every time, so Shawn stops to chat up Sophie for a bit. When he catches up, he finally appears behind Gus in the security room, completely undetected by the cameras. Now that they've finally figured out it can be done, Gus rushes to get out before the place closes. The lights go out, however, and Shawn confesses that he asked Sophie for permission to spend the night locked in the museum. As he was trying to crack the cameras, Shawn noticed an exhibit that looked like someone had tried to break into it, so he figured that person might come back and try again, since the night guard is missing. Gus is freaked out and tries the door. Shawn follows him and sees a camera on a hill outside the window. But before he can fully process that, he gets a call from Juliet saying that Hastings was driving a loaner gray GMC pick up - exactly like the one parked outside the museum, next to the only other car out there, Gus's Yaris. He's so shocked, he drops the phone and it shatters. Now they are possibly stuck over night with a criminal. To get Gus' mind off it, he tells him what he discovered. One of the cameras is titled away from a new exhibit of old pistols, one of them with a chip missing from its ivory handle, but none of them are worth stealing. He looks into the next room over at an exhibit of a 1950s kitchen and sees that for some reason the Frigidaire is plugged in. Shawn pulls open the door and Hastings body falls out.

The next day they meet Lassiter and Juliet at the cemetery as they exhume the body of Wyles III, whose son William Wyles IV is not happy about his father's eternal rest being disturbed. The cops got the coroner's report back on Hastings, who was strangled to death by a hand wrapped in cloth, transferring 3000 years old spores to the body, implicating the mummy in the murder.

Shawn goes to Henry for advice on how to track down a suspect that doesn't exist any more. Henry suggests he back trace his target's steps, and then tries to talk to him about something important but Shawn rushes off, saying he'll come back later.

At the station, Lassiter is watching a news report on his case. Wyles III was originally thought to have been alone in the house and fallen down the stairs, but a maid recently came forward to say she heard him in an argument that night. An old photo of Wyles III standing at the top of his staircase in front of trophies and his antique gun collection is shown. Meanwhile, Shawn has tracked the trail of the mummy exhibit across the States and to the museum warehouse, everything being fine until the day when it got up and walked out. They need to check out its last stop, the warehouse. They question the foreman, who seems distracted but tells them the mummy was processed like everything else - it showed up, a museum rep did an inspection, then it went out on the floor. Shawn then looks out the door up the hill, and sees a girl carrying the camera he saw away. He and Gus track her down and she tells them she's a film student named Hannah, doing a time-lapse project and the museum happens to be in her shot. They go with her to her editing room where she shows them the footage of the mummy walking out of the museum and driving off in a white van, a van Shawn remembers seeing in the parking lot of the museum warehouse. They head back to the warehouse and see the van take off, giving chase until it crashes into a tree in the woods. When the go over to investigate, they find the mummy crumpled over in the front seat.

They go to the police station to get Lassiter to come check out the van, but he says he's got a break in his case. The autopsy on Wyles III showed he died from trauma to the head before he fell, lodging a tiny chip of ivory in his skull. Lassiter tells Shawn the only reason he got involved in the museum case anyway is that Wyles IV is on the board of directors, and he thought it would be another way into his own case. With that, Shawn has solved both cases at once and takes everyone to the museum where he puts it all together. Wyles IV killed his father with the pistol then put it back in the case, which his father had bequeathed to the museum. When he saw in the paper that the case was being reopened, he had to retrieve the pistol with the evidence on it. So he put off the overhaul of the security system, then with the help of the museum foreman, he dressed as a mummy and waited for the museum to close before he got up and tried to break into the pistol case. Hastings surprised him, so he killed him and ran out, setting off the alarm and leaving the pistol behind.

Back at the police station, Vick is saying her good-byes when she gets a call from the mayor. It turns out, his candidate to replace her was caught in compromising photographs with a woman who was not his wife, and the mayor is now begging her to stay. Just then Lassiter walks in with the paper open to the incriminating photo - it's the man and woman Shawn was tailing at the beginning. With everything wrapped up, he finally has time to go back and finish that conversation with Henry, but before Henry can get out what he's trying to say, there's a knock at the door. Shawn opens it and a look of shock crosses his face as he says just one word, "Mom?"[1]

Gus: [mocking Shawn after his phone is muted] Look at me, look at me, I love my hair! I can make obscure '80s references that nobody understands. Laugh at me, ha ha ha! Hey, know something about me? I have a motorcycle, but I never seem to be riding it!

Shawn: [to Gus] I need you! I need the sweet blue shirt, I need the pants, I need the winsome smile that hides the sad Jamaican clown inside. 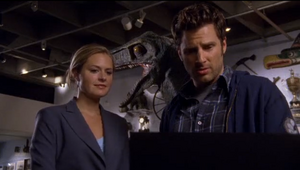 The gallery for Shawn (and Gus) of the Dead can be found here.

Retrieved from "https://psychusa.fandom.com/wiki/Shawn_(and_Gus)_of_the_Dead?oldid=37938"
Community content is available under CC-BY-SA unless otherwise noted.