Season One of Psych originally aired in the United States on USA Network from July 7, 2006, to March 2, 2007. It consisted of 15 episodes. James Roday, Dulé Hill, Timothy Omundson, Maggie Lawson, and Corbin Bernsen were introduced as portraying the main characters. James Roday portrayed Shawn Spencer, a fake psychic detective who periodically consults for the Santa Barbara Police Department. A DVD of the season was released on June 26, 2007.

James Roday was cast in the position of Shawn Spencer, a fake psychic detective. Dulé Hill was awarded the role of his partner, Burton "Gus" Guster. The part of Head Detective Carlton "Lassie" Lassiter was given to Timothy Omundson, and Corbin Bernsen was cast as Henry Spencer. Anne Dudek was given the part of Det. Lucinda Barry. However, the character only appeared in the pilot episode. Maggie Lawson replaced her as Detective Juliet "Jules" O'Hara. 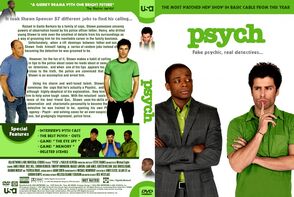 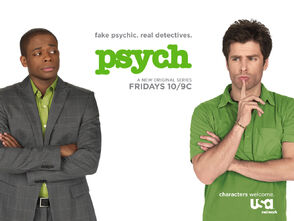 Add a photo to this gallery
Retrieved from "https://psychusa.fandom.com/wiki/Season_One?oldid=37744"
Community content is available under CC-BY-SA unless otherwise noted.