"S.E.I.Z.E. the Day" is the second episode of Season Eight. Despite their demotions, Shawn, Gus and Lassiter team up to track down the criminal who tried to assassinate Interim Chief Trout.

We pick up where we left off last season. Karen has been put on suspension for 6 months, Harris Trout is the Interim Chief, Lassiter has been demoted to beat cop, Juliet is now Interim Head Detective and Trout still has no interest in hiring Shawn and Gus to help the SBPD solve any cases.

Shawn and Gus show up to a crime scene uninvited, hoping to prove themselves worthy to Trout. The SBPD have stationed themselves outside a house they know their perp is hiding in. Trout is devising their plan of attack with Juliet. Shawn's first move is to get past the police barricade with the help of a shy onlooker holding flowers for his wife. The shy man is trying to get to his house, which is nearby the house the SBPD is blocking off. He can't get to it because the barricade is in the way. When the shy man approaches the barricade, Trout has him arrested for disrupting a police investigation.

Just then, Lassiter sees the perp from his vantage point. Knowing he needs to prove himself to Trout in order to be reinstated as head detective, Lassiter decides to take down the perp himself. He does so in stunning fashion, but Trout fails to give Lassiter credit for the takedown at the press conference a couple days later.

During the press conference, Trout is suddenly shot at by an unknown gunman driving a white van. Bullets hit the podium, just barely missing Trout. More shots are fired and Lassiter pushes Trout out of harm's way. The gunman no longer has a shot, so he takes off.

Back at the SBPD, Juliet delivers the briefing on the shooting at the press conference. Shawn notices Lassiter moping at his desk; even though Lassiter saved Trout's life, Trout isn't giving him any credit for it. Shawn, acting like a life coach, encourages Lassiter to seize this opportunity to prove himself. Lassiter eventually agrees and announces to the bullpen that he is going to make it his personal priority to find and arrest the shooter. That night, Lassiter returns home to his wife Marlowe who has big news for him - she's pregnant.

The next day, Lassiter pulls over a white van that matches the description of the shooter's van. During his approach, he sees a man pushing a baby in a stroller and the news of Marlowe's pregnancy starts to sink in. He's reminded of how dangerous his job is and that he doesn't want to die an untimely death with a baby on the way. He decides to call Juliet for back up. She arrives and is stunned by Lassiter's uncharacteristic hesitation. The driver of the white van is a mother with no priors. She's clearly not their shooter.

Lassiter knows that if he finds and arrests the shooter, he'll get his job back. But he also knows he can't take the shooter down without help, so he enlists the help of Shawn and Gus. He tells them his situation has recently changed and that he is no longer physically capable of pursuing the case on his own. Shawn and Gus are a shocked to hear this. Lassiter never asks for help, especially from them. He does not reveal Marlowe is pregnant, so his reasoning for suddenly being physically incapable remains a mystery to Shawn and Gus.

Lassiter gets straight to business and hands over a large case file containing death threats that Trout has received over the years. Shawn notices a few threatening letters in particular. The letters point them to a woman who just happens to be Trout's mother.

They bring Trout's mother into the station for questioning. Trout hates his mother so he takes this opportunity to humiliate her by interrogating her. Just then, Juliet tells Shawn, Gus, and Lassiter that she got word of another shooting and that the gunman fled the scene driving a white van. Upon hearing this news, they realize that it couldn't have been Trout's mom that took those shots at him, so she's dismissed.

Shawn, Gus, Juliet and Lassiter go to question the shooting victim in the hospital. The victim, Vance McMillan, who managed to escape the shooting barely harmed, turns out to be a huge jerk. Shawn points out that the only thing Vance and Trout have in common is that they are both giant "a-holes." Shawn thinks the shooter is killing all the "a-holes" of Santa Barbara. But no one takes that theory seriously.

Later, after Vance is released from the hospital, Trout orders Lassiter to drop Vance's personal belongings off at his place of business, Macmillan Industries. While there, Lassiter notices a white van parked out front. He gets scared and calls for Shawn and Gus' help. When they arrive, Shawn acts like Lassiter's life coach again by encouraging him to seize the day and catch the perp. Ultimately, Lassiter can't muster the courage to do it. Just then, they hear movement inside the building, so Shawn and Gus go in to check it out. It is then that Shawn thinks he realizes why Lassiter has been so feeble and afraid these past 24 hours. Armed with a series of clues, Shawn believes Lassiter found out that he's dying, and because of that, he is physically incapable of solving the case on his own. But Gus isn't so sure. Just then, Shawn and Gus spot a dark figure creeping through the building. The dark figure notices them, fires his gun at them, and then starts to run away. He makes it outside, but can't get in the white van because Lassiter is standing right by it, so he takes off on foot. Shawn, Gus and Lassiter go back inside the building to see if Vance is okay. They find him dead in his office, presumably shot by the dark figure that just escaped.

Back at the SBPD, Trout punishes Lassiter for letting the shooter get away. Juliet tells the group that they traced the white van to a man named Tony Delfin and shows them a photo of a man wearing glasses. Juliet says they should head to the fish market where Tony works and that they should ask Lassiter to come along. She's noticed how down in the dumps he's been ever since being demoted. It is then that Shawn reluctantly relays his theory to Juliet that Lassiter may be dying. Juliet doesn't believe this news at first, but, after overhearing one of his phone conversations and connecting a series of incidences, she too realizes her old partner's days might indeed be numbered.

Shawn, Gus, Juliet, and Lassie arrive at the fish market looking for information from Tony's co-workers. It is revealed that he hasn't been seen in a few days. Shawn is talking to another co-worker when he spots a clue. The clue leads them to a vat filled with fish guts. Floating on top is a pair of glasses that match the pair Tony was wearing in the photo Juliet showed them. They pull Tony out of the vat and he's confirmed dead, which means their shooter is still out there.

Still at the fish market, Juliet and Lassiter are confused as to how the two victims and Trout are related. Tony has been dead for a few days, so whoever the killer is must have stolen his van and used it to drive around killing people. Just then, Shawn focuses his attention on the logo of the fish market on the wall. Through a series of Shawn visions and flashbacks, things start to click. The shy man from the beginning was wearing a jacket with that same logo. Shawn believes the shy man is the killer and tells everyone that he knows where to find him.

Shawn, Gus, Juliet and Lassiter return to the same neighborhood they were in at the start of the episode. The four of them are interviewing the shy man's wife, who tells them his name is Patrick Abushawn. His wife, Marie, explains that she threw him out of the house a few days ago because he missed their anniversary dinner. As she tells them more about her husband, the link between Patrick, Trout, Tony, and Vance comes to light. The victims are the reasons why Patrick lost his job and why his wife is leaving him. While his wife is still talking, Lassiter's eye catches a glimpse of someone suspicious in the house across the street (the same house that the SBPD was stationed outside of at the beginning of the episode). Lassiter goes to take a closer look. Shawn then sees what Lassiter is doing, and is surprised that he'd go in by himself. Juliet, Gus and Shawn rush over to help him.

Lassiter has now slipped into the house where Patrick is, trying his best to fight his fear of death. He has his gun trained on Patrick, but trips on the rug and accidentally drops it. When Patrick turns around, Lassiter sees that Patrick has a gun too. Lassiter, unarmed, is even more afraid, so he tries to level with Patrick by telling him he has a baby on the way and that he wishes to end this peacefully and walk away unharmed.

While this is all happening, Shawn, Gus and Juliet overhear Lassiter telling Patrick that he is going to have a baby. Right then, Shawn realizes that his theory about Lassiter dying is in fact not true. After he found out he was going to be a father, Lassiter had become aware of his own mortality, which explains his uncharacteristic behavior.

Patrick does not respond to Lassiter's levelheaded pleas. It's then that something clicks in Lassie's head. He's not going to let bad guys rule him and continue to wreak havoc on the town his child is going to grow up in. This realization causes Lassiter to snap back into his old self. He dives for his gun like a ninja and points it straight at Patrick, who was unable to pick up his gun before Lassiter got to his. Patrick has nowhere to run and Lassiter feels on top of the world for having caught him. Shawn, Gus and Juliet join Lassiter and they congratulate him on the baby news.

Back at the SBPD, Trout finally gives Lassiter the praise he deserves. Lassiter hopes this means he's reinstating him as head detective. But unfortunately that is not the case. Trout tells Lassiter that he will still be on beat duty, but that he found extra money in the budget for a driver. For a small bump in pay, Lassiter will be driving Trout to all of his work related affairs. This is not exactly the news he was hoping to hear. But ultimately, Lassiter is happy he was able to overcome his fear on the job; he's finally back to being his old self again and it feels good.

We end on Lassiter sitting in Henry's car having a conversation about fatherhood. Henry, as always, gives sage advice, and Lassiter takes it to heart. Just then, he hops out of Henry's car and we realize that Lassiter had pulled him over for a broken taillight. To Henry's surprise, Lassiter still gives him a ticket for it. 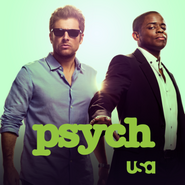 Psych: The Complete Collection
Add a photo to this gallery
Retrieved from "https://psychusa.fandom.com/wiki/S.E.I.Z.E._the_Day?oldid=38021"
Community content is available under CC-BY-SA unless otherwise noted.