This page is about the USA Network television series Psych. If you are instead looking for the detective agency started by Shawn and Gus on the show, go to Psych (agency). 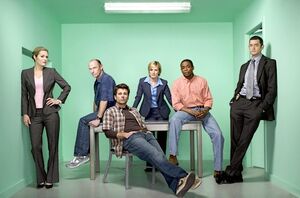 Psych is an American detective comedy-drama television series which spoofs procedural dramas that were extremely popular in the 2000s. It was created by Steve Franks and broadcast on USA Network. The series aired new episodes in the U.S. on Wednesdays at 9PM ET/PT, 9PM CST. Psych debuted on Friday, July 7, 2006, immediately following the fifth season premiere of Monk, and continued to be paired with the series until Monk's conclusion on December 4, 2009. It was the highest-rated U.S. basic cable television premiere of 2006. Season Six ended on April 11, 2012. It was USA Network's longest-running original series on air at the time it ended. On January 10, 2012, USA renewed the series for Season Seven, to include 16 episodes. On December 19, 2012, a renewal for Season Eight was announced. Psych began its eighth and final season on January 8, 2014, concluding on March 26 with the final episode of the entire series and the Psych After Pshow.

There have been three Psych movies released so far, with at least three more being planned:

There have been three official spin-off series of Psych:

There have been six books released that are based on Psych:

You can stream Psych on several platforms: