"Neil Simon's Lover's Retreat" is the ninth episode of season six. What starts out as a romantic getaway for Shawn and Juliet turns into disaster when the couple they previously befriended rob them and several others, and Shawn is especially angry when his Nintendo DS is one of the missing items. Just as a dead body which may be connected to be robberies turns up, Gus, Lassiter, and Henry arrive and join the case.

A businessman named Jerry Kincaid is conned and robbed by a couple named Barbie and Clive Noble. After Barbie and Clive flee the scene of the robbery, they arrive at a swanky resort hotel where Juliet and Shawn have just checked into — with the help of Shawn stealing Gus' credit card, naturally. Juliet and Shawn are there for a romantic weekend getaway — one they have promised will be completely devoid of police work and instead, filled with the opportunity to take their relationship to the next level.

Barbie and Clive come face to face with Shawn and Juliet at the pool. They get to chatting and eventually decide to have dinner together later that evening.

Lassiter, Gus, and Henry are out at a young, hip bar and look totally out of place. They decide to make the best of it by challenging each other to be the first to score a number from a girl. Surprisingly, Henry is the only successful one - he gets the phone number of a sexy 20-something blonde named Chelsea. The losers, meaning Gus and Lassiter, have to throw a BBQ the next day for Henry, the winner.

Dinner with Barbie and Clive goes really well. While there, Shawn notices the presence of a loud Texan, wearing a pistol and a $100,000 watch, mouthing off about his boxed wine business. Just then, Clive sees Jerry Kincaid, the man he robbed earlier, walk up to the bar. Clive knows that if Jerry sees him and Barbie, they are toast, so Clive and Barbie make a quick exit from dinner and agree to see Shawn and Juliet the next day for tennis.

Later that night, upon returning to their suite, Shawn and Juliet discover they've been robbed. Shawn and Juliet alert the hotel staff and give them a report of what was stolen. Shawn is freaking out because not only was Gus' credit card stolen, but his precious Nintendo DS was stolen as well. Shawn tries to get a hold of Barbie and Clive, but is shocked to learn that they were never registered guests at the hotel to begin with. From this, Shawn realizes it was Barbie and Clive that robbed them.

At the BBQ, Gus is shocked when he gets a call from Capital One Credit services saying there has been some suspicious activity on his card in the Ojai area. From this, Gus realizes that Shawn has paid for his weekend getaway with Juliet on his credit card and is furious. Gus calls Shawn to ream him, but Shawn explains that they got robbed and that his credit card is in the hands of two criminals. This does not help the situation for Gus; he is even more furious. Shawn asks Gus where the fraudulent charges were made and Gus says the thieves last used it at a winery. Shawn then suggests that he and Juliet go wine tasting, completely forgetting that he and Juliet are there for a vacation and not to investigate.

Back at the BBQ, Henry is shocked when the hot girl, Chelsea, whose number he got from the bar, shows up at his house acting like a giggling fool obsessed with Henry.

Lassiter and Gus decide to meet up at the resort where Juliet and Shawn are. They leave Henry with Chelsea, but Henry escapes her and heads up to the resort with the guys after he learns Chelsea is a bit on the crazy side.

Shawn and Juliet follow Barbie and Clive's trail to a winery. At the winery, Shawn meets Jerry Kincaid. They get to talking and Shawn learns that Barbie and Clive had robbed Jerry too. Just then, a scream is heard and the dead body of the Texan is found in a wine barrel. And with that, Juliet and Shawn's romantic getaway vacation turns into a murder investigation. Just then, Henry, Lassiter and Gus show up to the crime scene. Gus immediately hands Shawn the credit card statement paper trail Barbie and Clive left. Gus is fuming over this. Lassiter shares with the group the gun the Texan was shot with. Shawn immediately thinks it was Barbie and Clive who used the Texan's own gun to kill him.

Shawn and Juliet find Barbie and Clive. They insist they never killed the Texan — just stole his watch and a briefcase filled with boring papers about buying a vineyard, the same vineyard Jules and Shawn were at earlier. Their story checks out.

Now Shawn and Juliet think it was the vineyard owner who killed the Texan because he didn't want to be forced to sell to some loudmouthed 'boxed wine guy'. They go to question him, but the owner claims he wanted to sell to the Texan. In fact, the owner was going to sell the place to some other buyer for much less, but when the Texan offered a huge amount, he immediately agreed to the sale. Shawn figures out that the person who was originally supposed to purchase the winery was Jerry Kincaid.

Juliet tells Lassiter, Gus and Henry to check out Jerry's hotel room. When they arrive at the room, they are shocked to see Jerry pointing a gun at them. When Juliet and Shawn arrive minutes later, they find that Jerry had locked Lassiter, Gus, and Henry in the sauna and fled.

Lassiter, Gus and Henry commandeer a Corvette and chase Jerry down with the aid of Juliet and Shawn watching Jerry's car from above in a hot air balloon. A high-speed chase ensues, and with the help of Shawn's eyes above, Lassiter is able to stop Jerry's car and arrest him.

And with that, Shawn and Juliet can finally finish out their romantic weekend in peace. Shawn apologizes to Juliet about work getting in the way and that he understands what Juliet meant by having an "adult weekend" together was to hint that she was ready to commit to marriage. Juliet quickly corrects Shawn by saying that marriage wasn't her intention. Shawn is shocked.

Since it was Gus' name the hotel room was reserved under, it's Gus who receives the Nintendo DS after it's found in a nearby dumpster by the hotel's staff. Gus notices something jangling in the DS. He goes to open it up and is shocked to see a diamond engagement ring. Gus is speechless to learn that the reason Shawn was so bent out of shape about his Nintendo DS being stolen is because he had hidden an engagement ring in there, with the intention of giving it to Juliet. 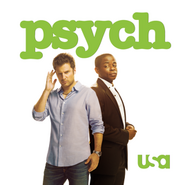 Psych: The Complete Collection
Add a photo to this gallery
Retrieved from "https://psychusa.fandom.com/wiki/Neil_Simon%27s_Lover%27s_Retreat?oldid=36211"
Community content is available under CC-BY-SA unless otherwise noted.