"Murder? ... Anyone? ... Anyone? ... Bueller?" is the second episode of Season Three. When Shawn is the sole witness to a murder at his and Gus' high school reunion, he must try to solve a case no one else thinks exists before the reunion ends and the attendees return to their grown-up lives.

Gus is in charge of his and Shawn's high school reunion and he wants the night to go perfectly. He warns Shawn not to mess things up, and then instructs him to go find more folding chairs. While Shawn heads to the cafeteria with Abigail Lytar, his high school crush, he sees, out the window behind her, someone fall to their death from the roof. But by the time they grab Gus and head outside, there is no sign of a body. Gus and Abigail don't believe anything happened, but Shawn claims the victim was wearing a letterman's jacket and, after they walk away, he spots part of a lapel pin in the grass.

Shawn follows Gus inside, insisting that a crime has occurred. He calls Lassiter who, as it happens, is already on site as the date of one of their fellow alumni, Mindy. He tells Shawn he can't do anything without a body, a murder weapon, a suspect or any evidence. Shawn describes the pin fragment he saw to Gus who tells him it's part of the State Champs pin the football team got their senior year. Shawn then remembers seeing that pin on their starting quarterback, Howie Tolkin, and claims he is the murder victim. But just then, he walks in alive and well with his wife Eileen.

Since Shawn just blew any credibility he had with Gus and Lassiter, he calls in Juliet for reinforcement. While waiting for her in the corridor, he notices someone has tampered with the trophy case dedicated to Howie's many football accomplishments. He and Juliet find Howie and Eileen to let them know about the vandalism, but Howie says he isn't bothered, claiming all of that is just history. He's moved on and is now running for the state assembly. Shawn and Juliet don't quite believe he's let go of the past so completely, but Shawn still can't prove anything. He needs to get onto the roof but Gus tells him the rest of the school is locked down tight. So Shawn calls Henry to ask him to find a box of high school mementos that's stored in the attic. Henry isn't familiar with the box, so he enlists Madeleine's help to find it. They both bring it to the reunion, embarrassing Shawn, who takes it from them and finds what he's looking for - a key ring containing all the keys to the school. He managed to join the custodial union when he was a student, he explains to Gus. He and Abigail then go to the roof to investigate, where he finds footprints that match the shoes of Howie and Eileen, finally giving him the identity of the killers.

He tells Gus what he found, who wonders why, if they killed someone, would still be dancing with their classmates. Shawn and Gus head to the library to do more investigating, where they scour the yearbook to discover that Howie and Eileen had a third wheel in high school, always hanging around worshiping them, trying to be their friend. His name is not listed, but Gus finds a picture of him in auto shop class. Shawn goes to the shop classroom to find any clues to the guy's identity, where he comes across Henry sitting alone in a car, reliving his high school days. The door to that classroom was already unlocked, Henry says. Shawn finds an empty beer can in the car and a picture of his mystery man with his name on it, Peter Colter.

Shawn and Gus go with Juliet to the police station to do a background check on Peter, where they discover that he was involved in an alcohol related car accident in high school. He hit a pedestrian who went into a coma and died a few months later. Howie and Eileen were in the car with them. Looking at pictures of the crime, Gus sees a bruise on Howie's forehead from the steering wheel and the driver's seat shifted back as if a tall person were driving. It was Howie who was driving the car and Peter covered for him, not realizing the victim would eventually die. Juliet also tells them that Howie and Eileen recently took out a restraining order against Peter. Just then, Chief Vick shows up, warning them they shouldn't be using police resources when they haven't been assigned a case. Lassiter covers to for them, saying they were helping him bust Mindy, the worst date of his life, who has been filling prescriptions under a false name for years.

Shawn and Gus go back to where Shawn claims the body fell and they realize Howie and Eileen must have shoved the body down the window into the girls' locker room. They go in to find Peter's body there, hidden inside the mascot costume. But the killers arrive to finally get rid of the body for good, so Shawn and Gus have to act quickly before the evidence is destroyed. Chased by Howie and Eileen, they grab the body and run to the gymnasium to find Lassiter and Juliet. There, after Gus announces they have won reunion king and queen, Shawn tells everyone the truth about the accident in high school. Peter had covered up Howie's part in it all these years to protect his idol's scholarship, but when Howie decided to run for office, Peter couldn't keep quiet anymore and repeatedly tried to contact them. He finally tracked them down at the reunion, and, drunk, confronted them on the roof, where they pushed him off, silencing him for good. With the case over, Shawn is able to finally, after thirteen years, share a kiss with Abigail. After that Gus narrates the ending as Brian Johnson did in The Breakfast Club. Gus and Shawn walk across the field as Shawn raises his arm as John Bender did at the end of The Breakfast Club.

Shawn: Assuming that Parker Stevenson had never been born... have you ever seen a very attractive man solve a crime before?
Abigail: I did see John Cusack prevent a jaywalking once.

Abigail: [listening to Shawn and Gus bickering] Oh, wait... I get it. You guys are dating. You're together. Everything makes sense.
Gus: We are not dating!
Shawn: You kidding me? He was voted "Most Likely To Succeed". You think he's going to date me?

Henry: Life is not made up of a single moment, it's made up of a gazillion moments. What defines us is the choice we make in the next moment, and the one after that. These moments, Shawn, they're happening, they're all around us all the time. You're having one right now.

Shawn: Well, if I was just some average guy without any superpowers, I'd say [mumbling and looking doofy], "I dunno, why ya askin' me?" But as head psychic of the Santa Barbara Police Department, I'd say [sounding very serious and poised], "I don't know. Why are you asking me?"

Gus: (in a voiceover a la The Breakfast Club) Dear Leland Bossy High administrative board, we accept that you're withholding our deposit for $1500 for damages. We also accept that you just see us as you want to see us in the simplest terms, in the most convenient definitions – a snarky psychic, an uptight pharmaceutical salesman, a pretty female blonde detective, and a not-so-pretty unusually lanky detective. But each of us is all of those things. Plus, our normal fee for solving a murder in one meaningful evening is twice that. So, enclosed is a bill for $3000. Please remit payment in the form of a check made out simply to "Psych". 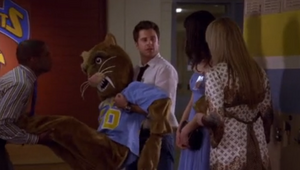 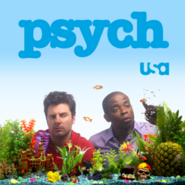