An Evening with Mr. Yang

Dr. Marion "Mary" Lightly III was an expert on Mr. Yang. He had been researching him for 13 years of his life. He was obsessed with Mr. Yang. He is portrayed by Jimmi Simpson.

Mary is introduced in the Season Three finale "An Evening with Mr. Yang". He helps Shawn and Gus find Mr. Yang. Mary knows almost everything about Yang, an obsessive focus that is nearly as creepy as the subject's crimes. Mary helps guide Shawn through the clues left by Yang throughout this investigation. He often reminded Shawn that the clues were meant to have personal significance to him [Shawn].

Mary is last seen alive in the Season Four finale "Mr. Yin Presents...". He finds Shawn and Gus outside the movies in the rain. Mary gets pie with the duo, and tells them that he hasn't left town since the events of "An Evening with Mr. Yang". Mary is a big fan of pie. Mary accompanies Shawn and Gus to visit Yang. Later Shawn and Gus believe Mary himself to be Mr. Yin, and Shawn shares this with the police. They agree to do nothing until they have proof that he is Yin. Later, Mary goes by himself to catch Yin. Yin stabs Mary and he dies in Shawn's arms. Before his death he tells Shawn that he went alone because he was trying to be heroic. Shawn and Gus both go to Mary's funeral service dressed in racquetball uniforms. This is because they always told Mary he should play the sport and may be an homage to the funeral scene in the film The Royal Tenenbaums.

In the Season Five finale "Yang 3 in 2D", Mary was shown in several video recordings (made before his death in the season 4 finale) for Shawn and Gus to observe his thoughts on Yin and Yang. In the videos, Mary was often rambling and hysterical, switching between sane comments and odd behavior. Mary had correctly theorized that Yang was more of a victim than an alleged murderer. These videos were interrupted at a point showing Allison Cowley tied in a basement.

In "Psych: The Musical", Mary appears in the song "Promised Land" as Yang's true love and an angel. He wears a fluffy white robe as she wished, yet underneath sports a racquetball outfit. Yang tries to convince Mary to find a way to let her into heaven, and he says he will give it a shot since he "knows a guy who knows another guy."

In Psych: The Movie, Mary appears in Shawn's dream wearing a racquetball outfit. This is a call-back to S3E16 "An Evening with Mr. Yang", where Shawn suggests racquetball as a new hobby to Mary after Mr. Yang has been caught. Shawn expresses his concerns about not being able to find Juliet's engagement ring to Mary, who tells him not to worry about it and breaks into Allison Road by Gin Blossoms. Shawn joins in but is then rudely awoken by Henry.

In Psych 2: Lassie Come Home, Mary appears in Shawn's psychotropic hallucination as a baby wearing a giraffe onesie inside a jumper chair. Mary expresses the joy of being a baby to Shawn, who sings him asleep with a lullaby. He then wakes up again when Gus walks into the room, who can also see him. Mary disappears when Wilkerson comes sneaking past and distracts the duo. 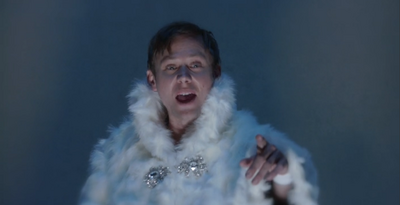 The gallery page for Mary Lightly can be found here.

Retrieved from "https://psychusa.fandom.com/wiki/Mary_Lightly?oldid=39357"
Community content is available under CC-BY-SA unless otherwise noted.