Psych Wiki
Register
Don't have an account?
Sign In
Advertisement
in: Characters, Female Characters, The Movie 2 Characters,
and 8 more

Marlowe Viccellio Lassiter is currently a parolee, the wife of Carlton Lassiter, and the mother of Lily Lassiter. She is portrayed by Kristy Swanson.

In "This Episode Sucks", Lassiter is alone at a bar, and Marlowe sits next to him, saying she hopes he wasn't saving that seat for someone else. Lassiter asks if she knows him, or thinks he's someone else. She asks him what his story is, and calls him by his first name, which puts Lassiter a bit on edge, and he asks her if she's a prostitute. She's a bit taken aback and says she's just a bit lonely. Lassiter tells Marlowe about himself, then she tells him she's "about as single as they come", and loves a guy with chest hair. She then excuses herself to the bathroom, but after a while, Lassiter goes to check on her and she's gone out the window. The next day Lassiter obsesses over figuring out who she is, and when he sees the necklace she was wearing the night before at a murder scene he agrees with Shawn's and Gus's conclusion that it was a vampire attack.

Lassiter then finds Marlowe's print on his watch, gets data on her, and goes to her house. Carlton sees she still has her necklace, so it wasn't her. Also, Marlowe reveals she watched Lassiter from the parking lot, and she had fled because she felt a real connection between them and was scared. Marlowe and Lassiter almost kiss, but then Juliet, Shawn, and Gus show up and tell him that someone made a phone call to a vampire bar for real blood, and it came from her house. Lassiter is her alibi since she can recall every move he made that night. She told them she lived with three other roommates, so they took one of them, Lucien, in for questioning.

Marlowe then goes over to Lassiter's for dinner, where they finally share a kiss. Unfortunately, before they can eat, Shawn, Gus, Juliet, Buzz and Henry arrive and tell Lassiter there was a break in at a blood bank, and that one of Marlowe's nails was found there. They find the stolen blood at her house, and Lassiter sadly handcuffs Marlowe and walks away. Marlowe admits to the theft, but not the murders. While Marlowe is in custody there's another attack, which means Marlowe isn't the killer. While at the hospital Shawn finds out that Marlowe's brother has a rare disease where he needs regular blood transfusions, and his blood type is O-Negative. Marlowe's brother is the one who has been draining people of their blood. Marlowe calls Lassiter and tries to tell him he needs to be ready, as he too has O-Negative blood, which is why Marlowe first came up to him. Just then Marlowe's brother Adrian shows up and attacks Lassiter with chloroform. As Lassiter comes to, Adrian tells Lassiter that his sister likes Lassiter very much, and he won't kill him, just take his blood. As Adrian readies the procedure, Lassiter breaks loose and takes control of the situation. Later he visits Marlowe in prison and promises to wait for her to get out of jail.

In "Let's Doo-Wop It Again," Lassiter calls on his girlfriend to help him with a case. He asks her to get close to gang leader "Lil' Sis" to help with his investigation. She says she'll try, but she'll have to do something big to gain her trust. She apologizes, and says what she is about to do was for them, then punches Lassiter square in the nose. She gets taken away by the guards, as Lil' Sis is clearly interested. Later, Marlowe, with cornrowed hair, tells Lassiter that she found out someone was skimming money from a charity to pay a gang, which might be why the charity leader was shot. Lassiter goes to kiss Marlowe, but a guard yells that there's, "NO TOUCHING!". They poke each other's fingers, then Lassiter leaves. After the case is solved, Lassiter arranges for Quarterblack (Shawn, Gus, Tony Clemon and Drake Clemon) to sing at her prison. While they're performing a riot breaks out, and Lassiter and Marlowe quickly kiss before Marlowe joins in the riot.

In "Cirque du Soul", Marlowe is set to be released from prison, but when her parole officer discovers that she and Carlton are a couple, she sets limits such as not being able to cohabitate with someone who was not her spouse, as well as not being able to live anywhere outside a 15.7 mile radius, ending 400 feet away from Carlton's home (Ursula, her parole officer, is out to get Carlton after a one-night stand). When Juliet allowed Marlowe to come and live with her and Shawn to allow Carlton to see her, Carlton realized that they had become a bother to Juliet and Shawn, and thus decided to get engaged. At the end of the episode, it is revealed that she is allowed to live with Carlton after Ursula became a couple with Woody, the department's coroner.

In "Deez Nups", after Lassiter practically forces Juliet and Karen to attend her bachelorette party, Marlowe confesses to Juliet that she is having doubts about marrying Carlton. She leaves the hotel room to get some fresh air but is kidnapped by crime boss, Max Rizzo. She escapes down a trash chute and is rescued by Shawn, Juliet, Lassiter, and Gus, only a few hours before the wedding. While getting changed for the wedding, Marlowe has a heart to heart conversation with Chief Vick, who tells her that marriage will have its ups and downs, but it is worth it. As she walks down the aisle, Rizzo's team of gunmen start firing and she dives into the bushes in her wedding gown. After the police take care for the gunmen, she and Carlton are wed in a somewhat disturbing ceremony.

In "S.E.I.Z.E. the Day", Marlowe briefly appears at her home. Carlton walks in talking about how he made a speech about protecting the new Interim Chief Harris Trout when Marlowe announces she is pregnant with their first child.

Shawn and Gus Truck Things Up[]

In "Shawn and Gus Truck Things Up", Marlowe appears at the police station heavily pregnant, clearly very close to her due date. Later she gives birth to Lily Lassiter in Shawn and Gus's food truck with the help of Henry and Shawn.

Marlowe appears at the end of Psych 2: Lassie Come Home to meet Lassiter at the Herschel House with tears in her eyes. When Lassiter sees her in the hallway, he gets up out of his wheelchair and walks for the first time in a long while. He shuffles over to her and they share an emotional kiss.

"It's just a crazy coincidence. These nails were made popular by Jersey Shore."
— Marlowe (from This Episode Sucks) 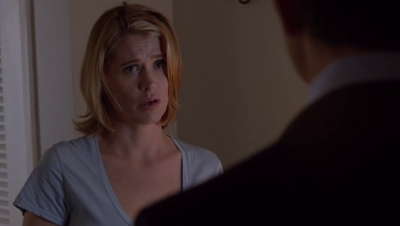 The gallery page for Marlowe Viccellio can be found here.

Community content is available under CC-BY-SA unless otherwise noted.
Advertisement