Andrew Bernstein
"Let's Get Hairy" is the eighth episode of Season Four. A man fears he is dangerous to society and enlists Shawn and Gus' help because, he claims, he is a werewolf.

Stewart Gimbley bursts into the Psych office looking for help. He went to the police first but was referred to Shawn and Gus instead. Stewart wants the guys to lock him up and observe him overnight. He gives them a gun with silver bullets for their protection, because Stewart believes he's a werewolf. He thinks he killed a lamb last night and is worried that tonight he'll do worse. He offers them three times their rate, which they readily accept, thinking this will be easy money. They tie Stewart up but then fall asleep themselves, only to wake up to the sound of the window shattering. Stewart is gone and a tuft of grey animal hair dangles from a shard of glass. Later that night we see two hunters brutally attacked in the woods.

The next morning, Shawn and Gus go to the police station for help tracking Stewart. Lassiter, who spoke with Stewart earlier, tells them his sister Willow runs an occult shop. On their way out, they give Juliet the grey animal hair and ask her to run it through the lab. At the shop, Willow tells them Stewart was bitten in the woods a few weeks ago. He refuses to let her help him because he says he's too dangerous. Shawn spots a photo of Stewart with a group of people. Willow tells him they are Stewart's therapy group. They got together for his birthday. They are very close. Meanwhile, Stewart wakes up in the forest, naked and bloody, a few feet away from the slaughtered hunters.

Back at the Psych office, Shawn goes through the overnight bag Stewart left and finds a prescription for Haloperidol, which Gus says is for schizophrenia and aggression. They go see the prescribing doctor, Dr. Ken Tucker, but his secretary Myrtle says the doctor isn't seeing new patients now and refuses to let them in. Then she gets a call and rushes down the hall to help Dr. Tucker restrain a screaming hysterical Asian woman. Shawn runs behind Myrtle's desk and uses Gus' cell phone to take pictures of information off her computer. Shawn finishes just as Myrtle comes back, escorting the woman out. Myrtle cryptically warns the woman, Polexia Li, not to do anything she would regret. As Polexia leaves, Shawn and Gus turn to watch her go, then Myrtle kicks them out. They see Polexia outside and Shawn thinks she looks familiar. Lassiter and Juliet show up at Tucker's and tell Shawn and Gus about the murdered hunters. Stewart is their prime suspect. The cops head inside to talk to Tucker, and Shawn remembers that Polexia is the bartender in the picture of Stewart's birthday. They decide to go talk to her. Meanwhile, Lassiter and Juliet have gotten in to see Tucker, whose office is decorated with dead stuffed animals. Tucker tells them that Stewart is troubled and has been blurring the lines of fantasy and reality. And he's been getting worse. At the bar, Shawn and Gus tell Polexia they are thinking of becoming patients of Tucker's, but she hints that he won't be practicing much longer and recommends they find another doctor.

Shawn and Gus return to the Psych office to find Stewart hiding in the closet. He says he needs help and that he thinks he should turn himself in. They tell him that they spoke with Polexia, trying to find someone to vouch for him. Stewart tells them that they call Polexia the Black Widow. She used to dominate their group sessions until she threatened Tucker. Now she only does one-on-ones with him. Shawn is beginning to think someone is using Stewart as part of their own nefarious plan because Stewart is vulnerable and believes in weird things. They take Stewart to hide out at Willow's while they find proof to connect Polexia to what's going on. Knowing Tucker's schedule from one of the pictures off Myrtle's computer, the guys arrive at his office just as he's leaving and sneak inside. They discover Polexia's file is missing and evidence that Stewart's prescription is being switched out with tranquilizers. They also find audiotapes, a receipt for a large purchase from the taxidermist and ladies' underwear. Shawn remembers watching Polexia leave and realizes she wasn't wearing any underwear. The culprit is not Polexia. They meet the cops at Willow's, who tells them Tucker came by earlier and took Stewart away. Shawn figures out that Polexia was having an affair with Tucker. She threatened to expose him, which would ruin his practice. Tucker was going to kill Polexia and pin it on Stewart, using the claws and teeth of a stuffed wolf, as he did with the lamb and the hunters. They track Polexia to the woods where they catch Tucker in the act, saving both her and Stewart just in time.

The list of references to pop culture and other media from this episode can be found here. 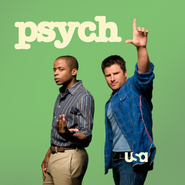 Psych: The Complete Collection
Add a photo to this gallery
Retrieved from "https://psychusa.fandom.com/wiki/Let%27s_Get_Hairy?oldid=36175"
Community content is available under CC-BY-SA unless otherwise noted.