Karen C. Vick, née Dunlap, (b. 1968) is a main character and was the chief of the Santa Barbara Police Department until she was suspended at the end of Season Seven by the then-Interim chief, Harris Trout. After that, she returned shortly in Season Eight, but was subsequently transferred to the San Francisco Police Department, and brought Juliet O'Hara along with her to be her Head Detective. She is portrayed by Kirsten Nelson.

Police Chief Karen Vick worked alongside Shawn Spencer's father, Henry, during his days on the force. While she may not be entirely sold on Shawn's strengths as a medium, she admires his moxie, as well as the fact that Shawn, like his father, delivers results. Karen is married with an unnamed son and one daughter, Iris, who was born during "Shawn vs. the Red Phantom". She also has a sister, Barbara Dunlap, who made an appearance in "There Might Be Blood" and it is shown that she had a sibling rivalry with Barbara. Karen was interim police chief until "Shawn (and Gus) of the Dead", in which she is promoted to full-time chief and remains at the station, only due to the fact that Shawn was able to unearth and disseminate a scandal about the man who was supposed to take her place.

In "No Trout About It", she was suspended for six months by Harris Trout, because Shawn, Gus, Juliet, and Lassiter disobeyed his orders.

In "1967: A Psych Odyssey" Karen left to become the Chief of the San Francisco Police Department.

At first, she didn't really enjoy having him around the office, but over time she began trusting him with more higher profile cases like Yin and Yang. At one point she even trusted him enough to let him try and find her a nanny.

Chief Vick generally views Gus as the leash on Shawn, the means to reel him back in when he's really out there, although she slowly develops an appreciation for Gus' own eclectic mixture of knowledge.

She respects Lassiter's instincts, abilities and service, but frequently appears to find him a little too rigid and monochrome in his worldview. The two have a particularly awkward moment when Carlton is dating the Chief's sister, Barbara Dunlap, although that romance just fizzles out.

Karen and Juliet grow to be like sisters more and more, which is especially obvious during Psych: The Movie.

Karen views Henry as a reliable professional whom can she trust in everything.

"Eighty suspects? Really, Mr. Spencer, it wouldn't be possible perhaps to narrow it down just a bit, would it?"
— Karen (from Talk Derby to Me)

"I can sit here all night, Betty. I have a sixth month old at home who still has colic. I consider this a reprieve."
— Karen (from Scary Sherry: Bianca's Toast) 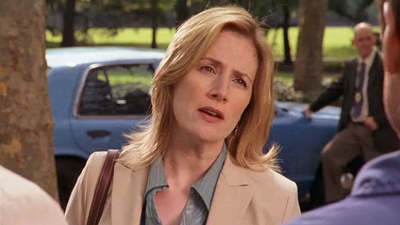 The gallery page for Karen Vick can be found here.