"Juliet Wears the Pantsuit" is the ninth episode of Season Seven. After kicking Shawn out of their apartment, Juliet gets a new roommate – who is more than she seems.

Shawn and Juliet have broken up, and Shawn is moving out of their shared home. Juliet tells Shawn she placed an ad on Craigslist for a new roommate and Shawn is immediately alarmed. He states that Craigslist is a cesspool filled with psychos and that Juliet has put herself in danger in doing so. Juliet insists that Shawn is overreacting and that she can take care of herself. Before Shawn leaves, he tells Jules that he still loves her and that he isn't going to give up on them. This is especially hard on Juliet because she still loves Shawn too, but she needs more time to get over the fact that he lied to her about being psychic.

Shawn asks Gus if he can crash at his place, but Gus says no because his girlfriend Rachael and her son Maximus are staying with him while their house gets fumigated. Desperate, Shawn decides to room with Woody, who claims to have a palatial beachfront property. When Shawn arrives at Woody's, he realizes this supposed beachfront property Woody claimed to have is in fact an Airstream trailer he parks by the beach.

Juliet ends up choosing a girl named Kimberly to be her roommate, but there's one problem... Kimberly never called Juliet back to accept the offer. The next day, Juliet, Lassiter, Shawn and Gus arrive at a murder scene. When they see the victim, Juliet immediately realizes the body is Kimberly. Juliet is horrified. At the morgue, Woody tells them she died of acute blunt force trauma to the head. Lassiter says that Kimberly's body was found with no ID and that he believes she was killed somewhere else and dragged to the field where they found her.

Faced with having to pick another roommate, Juliet goes with her second choice, a bubbly woman named Laura Buck. Juliet helps her move in and they immediately hit it off. Laura asks Juliet to join her later for a drink and Juliet says yes. Just then, Shawn stops by Juliet's place to get any leads on who might have killed Kimberly. He meets Laura and is immediately not fond of her even though she appears to be perfectly harmless. Laura takes off to run some errands and Juliet tells Shawn that she remembered something about Kimberly that might lead them to her killer. Juliet tells him that Kimberly did Bikram yoga and that there is only one Bikram yoga studio in town.

Shawn and Gus arrive at the Bikram yoga studio to question the instructor. The instructor tells them she doesn't have time for questions because she has back-to-back classes all day, so Shawn convinces Gus to join the Bikram yoga class to get answers more quickly. After Shawn and Gus make a scene during class and interrupt the whole session, the instructor has no choice but to answer Shawn's question to get him to leave. She tells them that the only thing she knew about Kimberly is that she lived in a building nearby called The Ivanhoe. On the way out of the studio, Shawn and Gus run into Juliet's new roommate Laura, and Shawn gets immediate vibes that she's coming on to him.

Shawn and Gus then head to The Ivanhoe to question Kimberly's former landlord, a jovial drunkard named Dave. Dave tells them that he hasn't even been in the apartment since Kimberly and her roommate Wendy moved out. He takes Shawn and Gus up to see the place and Shawn immediately sees blood on the carpet and a clue that leads him to believe that Juliet's new roommate Laura may have killed Kimberly in this apartment then dragged her body to a field in order to score Juliet's highly coveted open roommate spot.

Shawn and Gus go to confront Laura at the bar she was going to meet Juliet at. Shawn spots the back of Juliet's head and makes his way over to the bar where she is chatting up some guys. When he approaches her and she turns around to see Shawn and Gus, they are shocked to see it's not Juliet - it's Laura. Laura changed her hairstyle and hair color to look identical to Juliet's. Juliet arrives at the bar and Shawn goes to warn her that Laura has gone full-on "Single White Female" and explains why he believes Laura killed Kimberly. Juliet thinks Shawn's theory is ridiculous because she knows Shawn is just doing this to win her back. Before Shawn can prove his theory to Juliet, he realizes that Laura is no longer there. While Shawn, Gus and Juliet weren't looking, Laura saw a news story on the bar's TV about Kimberly's mysterious death and fled.

When the waitress at the bar mistakes Juliet for Laura by handing her the clutch purse "she" left at the bar, Juliet knows that Shawn was telling the truth. Inside Laura's clutch they find a series of credit cards and IDs all with different names, each showcasing a picture of Laura wearing a different look and hair color. One of the IDs belongs to a woman named "Wendy Spitznagle." This triggers Shawn to flashback to the moment when Dave the landlord said Kimberly had a roommate named Wendy. Shawn presents the theory that Laura is Wendy. They head back to Juliet's apartment and realize Laura has stolen all of Juliet's clothes and has essentially ransacked the place and moved out. From this, they realize that Laura is an identity thief and quite possibly Kimberly's murderer.

Shawn later finds out from Woody that he saw Juliet, who Shawn knows is really Laura dressed identically to Juliet, getting wasted at a local bar called The Owl's Nest. Juliet and Lassiter show up to catch her, but are too late. They see Laura's Jeep taking off from the parking lot in a hurry. A car chase ensues with Juliet at the wheel, determined to track down and arrest the woman she thought she trusted enough to share an apartment with. She and Lassiter end up losing Laura's trail when they get cut off by a speeding Black Car that is also chasing Laura's Jeep. When Juliet and Lassiter arrive at a bridge, they are horrified to discover that Laura's Jeep has gone over the edge of the bridge.

The next day at the station, Lassiter tells the group that Laura's body wasn't found in the water so the currents must have taken her when she ejected through the Jeep's windshield. He says the only thing they found in the car was a woman's pantsuit - Juliet's pantsuit to be exact. He also presents the theory that the person driving the Black Car must have been someone who Laura had wronged in the past and that they forced her car over the ledge in an act of revenge. Shawn remembers seeing a Black Car with the same license plate parked outside of Kimberly's old apartment building. They head back there to question the landlord one more time. The landlord is clean because he got his license revoked back in the 80s, so they jump on their next lead: a phone bill that was delivered to Kimberly and Wendy/Laura's apartment that they never picked up. Shawn and Gus dial a number that keeps coming up on the phone bill and they realize they are talking to Laura's mother who, in a state panic, asks "Laynie" (who is really Laura/Wendy) if she found her most prized possession: her grandmother's locket. Shawn knows that the locket "Laynie's" mother is talking about belongs to Laura because he saw her wearing it on her way into the yoga studio - which also leads Shawn to believe that Laura is still alive and ran the Jeep off the bridge on purpose to stage her own death. Based on the phone call with Laura's mom, Shawn also believes that Laura wouldn't flee town without retrieving her precious locket. Shawn and Gus head back to the yoga studio to see if she left the locket in her locker, but it isn't there.

Back at the SBPD, Juliet interviews one of Laura's old roommates who tells them that Laura got super weird and vanished after the day she saw a Black Ford parked out in front of their shared apartment (the same Black Car that was following Laura's Jeep the night of her accident on the bridge). Shawn takes another look at Laura's IDs and sees that there is one with the name "Laynie Stromwall" on it. He flashes back to the phone call from Laynie's mom and determines that Laynie Stromwall is Laura's real name and identity. They do a background check on her but surprisingly it comes up completely clean; she was a model citizen. Based on this info and the fact that Laura had mentioned being in a "bad relationship" to Juliet before, they determine that she was running from someone. They check her name on the Internet and they find a wedding announcement for Laynie and a man named Patrick Hess. Shawn immediately recognizes Patrick; he had stopped by Juliet's apartment looking for Laynie the night before. From this, they determine that Laynie married Patrick, things went sour, he wouldn't give her a divorce so she had to run from him, state to state, and change her look and name every time he caught up with her.

In the end, Juliet finds the locket back at her apartment just as Laynie shows up to reclaim it. Juliet is stunned by how similar they look. Juliet tries to tell her that everything is going to be okay and that Patrick is never going to hurt her again. But it's too late; Patrick has cut the power line in Juliet's place and the two women find themselves in danger, and at Patrick's mercy. Juliet takes charge of the situation and uses hers and Laura's same look to their advantage... to create a distraction by fooling Patrick into thinking he's seeing double. Juliet's plan works, she takes Patrick down like a champ and arrests him once and for all. Laynie is finally free from Patrick, so she moves back to Arkansas to be with her mother.

Later, Shawn helps Juliet repair a window that got broken in the fight she had with Patrick. Shawn and Juliet have a conversation that clearly shows they still have chemistry and that they miss each other. Shawn sees this as his opportunity to possibly move back in with Juliet. Juliet softens a bit and tells Shawn that she was impressed by his casework. But she isn't ready to forgive him for lying to her about being psychic. She also mentions that she isn't interested in any more roommates in general because of how traumatizing of an experience it was. But Shawn still remains hopeful that Juliet will forgive him and that they will eventually get back together. 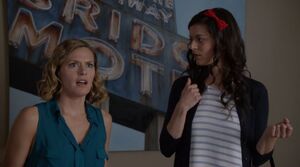 The gallery for "Juliet Wears the Pantsuit" can be found here. 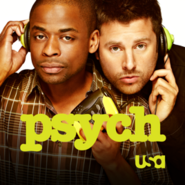 Psych: The Complete Collection
Add a photo to this gallery
Retrieved from "https://psychusa.fandom.com/wiki/Juliet_Wears_the_Pantsuit?oldid=39104"
Community content is available under CC-BY-SA unless otherwise noted.