Henry William Spencer, Jr. (b. 1958) is a main character and a (repeatedly) retired police officer, the father of Shawn Spencer, and ex-husband of Madeleine Spencer. He is portrayed by Corbin Bernsen.

Retired cop Henry Spencer (aka "Old Scratch Johnson" "Popeye Doyle" or "Big Old Papa Monkey") is a fan of Jersey Shore yet makes no bones about his contempt for Shawn's new business venture. After years spent training his son to observe and analyze like a detective, Henry can't believe that Shawn would squander his enormous talent only to take his place at the bottom of the law enforcement food chain as a psychic. Shawn's rebellious streak was also partly caused by Henry; his tendencies for control, as well as his constant training, deprived Shawn of a real childhood and it resulted in a backlash of rebellion. Shawn believed that Henry was the parent who wanted the divorce, and Henry never told Shawn otherwise. Henry has still shown interest in his ex-wife, even though he has also shown interest in other women.

Having spent many years as a veteran, and well-seasoned cop, he prompted to train Shawn in case of any emergencies as well as teach him to be an excellent cop. This has been through regimented sessions through many opportunities in Shawn's life, with even playtimes and such being rephrased into an exercise. This led to growing tension between the two and a catharsis was formed when Shawn got a felony for GTA. Even though Henry was the cause of Shawn's position (as Shawn's arrest prevented him from ever becoming a detective, and Henry raised Shawn to become that), it just completes the long spiral of disappointment that has left his relationship with his son strained to say the least.[1] He does get one good thing out of it, though: a chance to be part of the detective business again. Henry is both very proud and very frustrated with his son because while he accomplishes great things, his methods are unorthodox and nonsensical. It's worth it, even when Shawn attempts, for instance, to admit him to an old folks home undercover posing him as a new resident, Talmadge McGulager. Or when he passes him off as Phil Collins to avoid being charged with obstruction of justice.

Henry also took a position at the police station as a consultant at the end of Season Four in order to be able to help with the search for Abigail Lytar and Juliet O'Hara (who had been kidnapped by Mr. Yin). He has not given Shawn and Gus as many cases as they would have liked, due to his belief that he should not be handing cases over to Shawn. He also has been known to not pay Shawn as much as he desired, as shown in "Not Even Close... Encounters".

Henry has also tried to help Shawn with his relationship problems. First, with Abigail, Henry met up with her for dinner without Shawn (Shawn did not want Abigail to meet Henry, but when she insisted, Henry was all right with the fact that he was going against Shawn's wishes to help him with his relationship). Later, when Shawn was determining what to do about his feeling towards Juliet, Henry gave him the advice: tell her about his feelings before she goes off to the Amalfi Coast with Declan Rand, her then boyfriend. He has helped Shawn with other relationship problems, such as "Treat a woman like a person, then a princess, then a Greek goddess, and then a person again." Shawn has also helped Henry with relationships, repeating the quote back to him, even though it has hurt him to know that his father was dating other women aside from his mother.

In "Santabarbaratown", he retired, after discovering his former police officer friends Lou Gamble and Jack Atwater were dirty cops, and later is shot at point blank range by his other cop friend Jerry Carp after discovering he was dirty too. In the Season Seven premiere, "Santabarbaratown 2", it is shown that Shawn rushes to the beach but gets there too late. Henry tells Shawn to go after Jerry but Shawn refuses to leave his dad alone. He is rushed to the hospital where they remove the bullet. As Henry is lying in bed Shawn starts to tell his dad that he loves him. Later in the episode, it is shown that Henry's old stalker, Chelsea is taking care of Henry to which he half-seriously tells Shawn to "Pull the plug", to which Shawn replies," I will not. Stop it". Shawn promised Henry that he would go after Carp and he did. In the end, Henry is safe and sound.

In "Juliet Takes a Luvvah", Madeleine is in town to help care for Henry, and Shawn moves back in to get to know Henry on a different level. Madeleine ends up moving back in as well.

It has also been implied that Henry does not have many friends, as Shawn and Juliet thought that it would be good if her stepfather, Lloyd French, and Henry became best friends. In trying to make this happen, Shawn sets up a lunch for the two of them. Before going to the lunch, Henry agrees to pick up a package for Lloyd, but then almost gets shot and ends up going to Mexico to pay a debt that Lloyd owed, unwillingly. He almost got killed in Mexico but was saved by Javier Lamas, the "Mexican version of Lassie", who also ended up being a bad guy. When Henry believed that Lloyd later got shot in that episode, he started giving a heartfelt speech on how he believed that Lloyd and he were friends. Shawn noticed that Lloyd was not actually dead, but was instead wearing a bulletproof vest, and upon his mention of it to Lloyd, Lloyd got up and also told Henry that he thought of him as a friend. Despite his recent speech, Henry was upset that Lloyd would go down to Mexico with protection but not give Henry a bulletproof vest as well. Shawn and Juliet still described their desire that the two of them become friends, but agreed that if it ever happened, that it should be natural, despite the fact that they both believed that it would never happen. In the last scene of the episode, Henry and Lloyd are shown about to go fishing together, where Henry is wearing a bulletproof vest for protection, stating, "Do you think I'd ever hang out with you again without one?" Lloyd still wants to go on similar adventures with Henry at the end of the episode, but upon Henry's insistence, they simply go fishing. It is later found out in the series, that the two men have become great friends.

He and his son haven't always seen eye to eye on things. The separation of Henry and his wife during Shawn's early years led to a rift in their relationship. They were closer during Shawn's childhood but grew apart after the divorce. Shawn would often attempt to rebel against his father's wishes, such as the time that he stole a neighbor's car to impress a girl, thus being unable to ever become a detective, as his father wished. Since then, they have made up, however. Henry can often be seen helping Shawn along on some of his tougher cases through meaningful advice.

Henry appears to have always understood Gus' importance to Shawn, and to have respected him as a person, often more clearly than Shawn. In "Cirque du Soul" Henry goes so far as to tell him that he (Gus) has been the one constant in Shawn's life through all the turmoil.

When Carlton was framed for murder and staying at Henry's house, he didn't seem to enjoy his company that much. Over time, however, they grew closer. They even went fishing once, much to Shawn's dismay. Later in the series, Henry gave Carlton some good parenting advice on how to be a dad.

" Yeah, well, after you were born it took you four months to smile at me. That's when the clock started tickin!"
— Henry Spencer (from Weekend Warriors)

"I'm a tax-paying, voting citizen, therefore I have a right to speak to any elected official, such as the DA, I please."
— Henry Spencer( from Disco Didn't Die. It Was Murdered!)

" First of all, Smokey the Bear is not a fireman. Number two, he's not real. Number three, HE'S A BEAR! He takes his poops in the woods, is that what you want?"
— Henry Spencer (from Earth, Wind and... Wait for It) 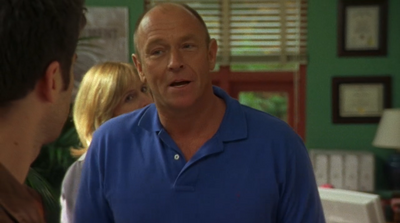 The gallery page for Henry Spencer can be found here.

Retrieved from "https://psychusa.fandom.com/wiki/Henry_Spencer?oldid=36446"
Community content is available under CC-BY-SA unless otherwise noted.