James Roday
"Deez Nups" is the seventh episode of season seven. While attending Lassie's wedding at a casino resort, the gang crosses paths with a crime boss.

Chief Vick is giving a briefing on a local crime boss named Max Rizzo, or "Max the Ax". She tells the group that Herb Pollock, Rizzo's long-time accountant, fled Rizzo's organization with a sizable amount of Rizzo's cash in addition to copies of all of his financial records. The chief informs them that if they can get to Herb, they can get to Rizzo and finally take him and his organization down for good.

Just then, Lassiter enters the bullpen at the SBPD wearing street clothes and tells the group he's taking the day off to plan his wedding. When Lassiter sees the case they're trying to solve, he's intrigued because he's been trying to catch Rizzo for a long time. But Lassiter reluctantly abstains from taking the case because he has already dedicated himself to planning his entire wedding in one day. He hands out wedding invitations on the spot and everyone is shocked to see that the wedding is this weekend. Lassiter then asks Chief Vick and Juliet if they'd be willing to be a part of his fiancée Marlowe's bachelorette party. Both ladies are reluctant to agree because the party organizer is an ex-con named Big Wendy. But Lassiter ultimately gets them on board. He tells them that the wedding will be at the Agua Verde Hotel and Casino. Juliet remembers that McNab does part time security over there.

Later that day, aggressive ex-con Big Wendy show up in an off-road vehicle with a frightened Chief Vick and Juliet in tow, ready to pick up Marlowe for her bachelorette party. After the ladies take off, Lassiter is abducted and wakes up in a party bus with Shawn, Gus, and Woody standing over him. They, along with Henry, who is driving the bus, decided to surprise Lassiter with a bachelor party. They then reveal that they flew in a special guest just for the occasion: Lassiter's best friend Stumpy. After a few seconds of getting to know Stumpy, Shawn and Gus realize that Stumpy may not be as cool as Lassiter made him out to be.

Later, both the bachelor party and the bachelorette party are being held at Agua Verde Hotel and Casino the night before the wedding. The girls are in their hotel room, drinking and having a good time. Big Wendy brings in a male stripper who just happens to be McNab, who was forced to take a side gig as stripper to be able to afford the condo he's been saving up for. He told Juliet he was working part time security at the hotel as a cover.

While walking through the casino, Shawn spots Rizzo's accountant Herb. Shawn knows that he needs to get the other officers at the SBPD to take him down so Lassiter's wedding weekend isn't ruined. He runs to tell Gus what's going on, but before they can make the call to the SBPD, Lassiter shows up with Herb in his clutches, ready to take him to the station for questioning. Lassie drags Herb and the guys to the party bus to hand deliver Herb to the authorities themselves. While on the bus, Herb confesses to the guys that he's worth nothing to them without the flash drives containing info on all of Rizzo's dealings. He tells them that the flash drives are at his apartment, but that he's unsure if Rizzo had already gotten to them himself.

Back at the girls' room, Vick is passed out from drinking too much and Marlowe expresses her pre-wedding jitters to Juliet. Juliet tries to calm her down and tell her that everything is going to be okay, but Marlowe isn't so sure. Marlowe leaves the room, thus letting Juliet know she needs some time to think.

When the guys arrive at Herb's apartment, Herb quickly grabs the flash drives. Just then they realize two of Rizzo's henchmen saw them take off with the flash drives. They run to the bus and the henchmen follow them with guns. The guys manage to narrowly escape from Rizzo's henchmen. The henchmen call Rizzo to tell them that Herb got away and that the person who took Herb is named Carlton and that he's marrying a woman named Marlowe. They figured this information out from a sign on the back of the party bus announcing Carlton and Marlowe's impending nuptials. Later, Lassiter gets a call from Rizzo telling him he knows that they have Herb and if they don't return Herb with the flash drives intact that he is going to harm Marlowe, who Rizzo has subsequently kidnapped.

They arrive at the exchange point and hand over each other's hostage. Both hostages are wearing a bag over their heads, so after each vehicle leaves the exchange point, they realize that they played each other. Both hostages aren't actually the real hostage. It turns out Henry pretended to be Herb and Rizzo got a random lady to play Marlowe because Marlowe escaped Rizzo and his men before he could bring her to the exchange point. The two groups decide to call it even and part ways. Lassiter, who is now determined to find Marlowe and Herb, warns Rizzo that he'll be put behind bars soon.

The guys first go in search of Marlowe. They check out the place where she escaped from and try to determine how she escaped. From this, Shawn realizes that Marlowe got chased back to the hotel and had to quickly hide herself in a secluded area in order to get away. Shawn remembers there being a trash chute on every floor of the hotel and that the trash chute room is a likely hiding spot for Marlowe. Shawn then tells the group he had a vision that Marlowe is hiding in the trash chute back at the hotel.

Back at the hotel, they rush to the trash chute room and sure enough, Marlowe is there hiding from Rizzo's henchmen. Lassiter and Marlowe are reunited and Juliet points out that the wedding is in less than two hours. They quickly rush back to their rooms to suit up and get Marlowe cleaned up and in her wedding gown.

When the guys make their way to the wedding location, Shawn realizes from a piece of evidence he found at Herb's place that Herb came back to the casino to hide out. Shawn tells Lassiter that he had a psychic vision that Herb is back at the hotel. Lassiter immediately retrieves Herb and stuffs him in the party bus and makes him attend the wedding. Lassie says he'll take Herb down to the SBPD for questioning after he's a married man. As it turns out, Rizzo's henchmen have been watching this whole scene play out. They call Rizzo and tell him where Herb is being taken.

On the way to the wedding, while Stumpy is vomiting jello shots in the bus bathroom, the guys question Lassiter's affection towards him. They don't understand how Lassiter could be friends with a guy like that. Lassiter tells them that he lied about Stumpy being his best friend and that he hasn't even seen him or talked to him since high school. He was embarrassed that he didn't have any close guy friends to invite to his bachelor party. But Lassiter thanks Shawn and Gus for the gesture. And it's in that moment that Lassiter realizes that Marlowe is his best friend and that she is all he will ever need.

Right before the wedding is about to start, Lassiter gets word that his officiant had to cancel. Herb chimes in and says that he is a licensed justice of the peace and that he would be happy to marry Lassiter and Marlowe.

Right before Marlowe is about to make her way down the aisle, Rizzo and his men show up with guns drawn. Lassiter immediately pulls out a gun hidden under his suit pant. Juliet pulls her gun out too and so does every wedding guest who is an officer for the SBPD. The other wedding guests take cover as the two parties engage in a shootout. The police win the shootout and Rizzo is forced to surrender and Marlowe and Lassiter are finally free to wed in safety.

Later at the wedding reception, Shawn gives Juliet his coat because she's cold. Juliet reaches inside the jacket pocket and discovers a piece of evidence that Shawn had to have used to create his supposed psychic vision that led them to Herb's location at the hotel after he escaped. She asks him why he would call this a psychic vision when he knew Herb's location from the piece of evidence he found. She asks Shawn to explain himself. From this, Shawn fears that Juliet may now know the truth about him not being a real psychic. Suddenly Shawn's relationship with Juliet flashes before his eyes. He tells her that this all started because he had to, and that because he and Gus solved over a hundred cases for the SBPD, he couldn't stop.

In a sense, he was able to justify the lie because he was doing good by taking down murderers and criminals. It is then that Juliet point blank asks Shawn if he's not a psychic. Shawn begs her not to make him answer that question, but his eyes tell her the truth. She knows now that Shawn isn't a psychic. Juliet is beyond shocked and embarrassed that her boyfriend whom she trusted and loved so dearly had been lying to her all this time. She throws her drink in his face and leaves. Shawn is beside himself and worries that Juliet may never be able to forgive him.

The title is presumably 'These Nuptials' in the cant of Big Wendy, the ex-con maid of honor, as well as a play on "Deez Nuts". 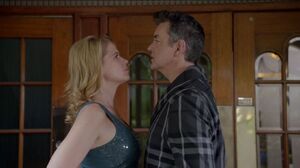 The gallery for Deez Nups can be found here.

Retrieved from "https://psychusa.fandom.com/wiki/Deez_Nups?oldid=33647"
Community content is available under CC-BY-SA unless otherwise noted.