Cloudy... With a Chance of Murder

Cloudy... With a Chance of Murder

"Cloudy... With a Chance of Murder" is the twelfth episode of Season One. When a woman sleeps with a beloved local weatherman but wakes up to find him dead, she is charged with his murder. Shawn finds a way into the case by becoming a consultant to the defense.

In 1985, Shawn is sitting with his father in court during a trial.  He starts asking Henry about who the jury is, with Henry replying that they are the most important people in the room - they decide guilt or innocence. Henry then makes Shawn read one of the jurors who is shoddily dressed and constantly looking down at his hands.

In the present day, Shawn's motorcycle has been impounded, so he and Gus go down to the courthouse to pay the ticket and free the bike. While there, Shawn notices a sweet woman picking up a piece of trash in the hallway. Back at the Psych office, Shawn sees the same woman, Sandra Panitch (Jolie Jenkins), on TV. It turns out, she's on trial for the brutal murder of a favorite local TV weatherman, Jackson Hale (Mark Brandon). She is accused of having sex with him at the studio, then stabbing him in the heart with a letter opener. But from what Shawn saw of her earlier, he's immediately convinced of her innocence. And from what he sees on TV now, he knows her bumbling, insecure lawyer, Adam Hornstock (Michael Weston), needs their help to win the case.

Shawn and Gus go to the courthouse to offer their legal consultant services to Hornstock, and catch some of the trial in progress. Hornstock is skeptical of them until Shawn helps him win the favor of a juror who disliked him.

Back at Hornstock's office, Shawn and Gus get briefed on the case but instead of reading the mountain of discovery papers, Shawn decides his time would be better spent going down to the station and getting vibes from the crime scene.

Priscilla Osterman (Keegan Connor Tracy), the receptionist, gives Shawn and Gus a tour of the studio and describes to them how the green screen works - how Jackson was able to be in the studio while looking like he's standing in front of a mountain or at the beach. When she takes them to Jackson's office, they meet meteorologist Ruben Leonard (Michael Eklund), who says nice things about Jackson, but Shawn sees clues that lead him to believe he hated the victim. They now have another suspect.

Back at the trial, Hornstock has Priscilla on the stand. He asks her about calls coming in to Jackson. She says she can't remember any calls coming in from Sandra, but she did field many from different women. He was an accomplished ladies man. It is after this that Shawn makes himself known to Judge Horace Leland. He introduces himself as the head psychic for the SBPD and, based on an earlier encounter, could "divine" that the judge was suffering from kidney stones. The judge allows Shawn to stay on the case.

Ruben Leonard is the next witness to take the stand. He tells the prosecution that he saw Sandra, covered in blood, running from the crime scene. Shawn tells Hornstock about the "feeling" he's getting that Ruben was jealous of Jackson. Hornstock then presses Ruben to admit how much he hated Jackson and he completely breaks down in the stand. Score one for the defense.

Outside the courthouse, Shawn and Gus run into Lassiter and Juliet. Lassiter was the lead detective on the case. After a brief conversation, Lassiter enters the courthouse while Juliet stays behind. As Juliet leaves, some papers fall out of her folder. Shawn is able to see that Lassiter sent a memo to the DA regarding the case, but that memo was never admitted into evidence. He realizes the DA is hiding something.

While on the stand, Lassiter testifies that Sandra admitted to sleeping with Jackson but denied killing him. Shawn tells Hornstock to ask Lassiter about the missing memo. Lassiter reveals that in the memo, he questioned whether Sandra had any motive at all for the killing. Another win for the defense until the DA admits into evidence a tape they recently received that shows Sandra killing Jackson in the television studio.

Shawn, Gus and Hornstock review the tape. Sandra appears unaware that she is being filmed. It seems that Jackson had a habit of bringing women back to the station and filming them against the green screen. As they continue viewing, Sandra and Jackson fall out of frame and then Jackson is heard screaming. The evidence seems damning, but Sandra still professes her innocence.

Shawn takes the tape and goes over to Henry's to run through the case. Henry tells him that crimes of passion are more about revenge, and he should find someone that fits that profile. Shawn reviews the tape again and sees something he missed the first time around. During his conversation with Henry, Shawn realizes his own father is the one who tipped off the meter maids about Shawn's motorcycle being illegally parked, leading to the impounding.

Shawn arrives at the trial just as the DA has finished showing the tape to the jury. He tells Hornstock to recall Priscilla to the stand and gets her to admit that while she never slept with Jackson, she wanted to. He slept with a lot of women but he never noticed her. Shawn says there is proof on the tape that Priscilla was the one who killed Jackson. He gets them to replay the tape, and shows the jury that what appears to be a cloud, is actually Priscilla's shadow - complete with the outline of her distinctive glasses. Hornstock takes over and gets Priscilla to admit that her jealousy and unrequited love led to her kill Jackson. With Priscilla's courtroom confession, Hornstock has won the case and Sandra is free to go.

Later on, there is an auction at the police station, and Shawn and Gus have gone there to get Shawn's motorcycle back. There, they meet Henry, who is on the same mission, as he felt bad he helped get Shawn in this situation. Hornstock soon arrives and tells the gang that he is now a partner in the law firm and would love to use the guys on future cases. As a thank you, he too is there to get Shawn's motorcycle back for him. McNab soon enters the room and tells Shawn that he can have his motorcycle back and that the tickets were taken care of internally. Lassiter walks in and, while everyone stares at him, he quickly leaves the room.[1] 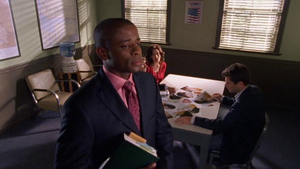 The gallery for Cloudy... With a Chance of Murder can be found here. 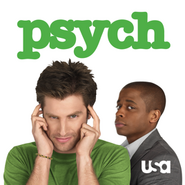