Busby "Buzz" McNab (b. September 11, 1975) is a Junior Detective for the Santa Barbara Police Department. He was fired by Harris Trout because of his part-time stripper job, but later reinstated by new Police Chief Carlton Lassiter. He is portrayed by Sage Brocklebank.

Buzz McNab is a sweet, albeit naive, officer with the Santa Barbara Police Department who has been friends with Shawn Spencer since the "Pilot". He is a dedicated police officer, although he can be a touch thick at times. He often does the repetitive work, sifting through endless data and physical records, which allows one of the main characters, usually Detective Lassiter or Detective O'Hara, to make a vital link, and move the case forward, if not close it.

He first met Shawn when Shawn was called in for questioning regarding his knowledge of several crimes for which he had called in tips. Shawn deduced that McNab was taking dancing lessons and that he was getting married (to Francine, a woman unseen through the series), and McNab accepted the deduction as evidence of Shawn's psychic abilities. He and Shawn have a genuinely friendly repartee that allows Shawn to get to scenes he otherwise wouldn't be able to access.

In "9 Lives", he was anxious about his wedding-night performance, and asked Detective Carlton Lassiter for advice on the subject. Because of Lassiter's own marital history, the detective reacted strongly and negatively to the question, and McNab dropped the issue. Due to Lassiter's reaction, McNab resorted to calling a 1-800 stress-line instead, which resulted in him becoming a target for serial killer Wes Hildenbach. Hildenbach's position as a telephone company technician gave him access to the phone lines leading to the stress-line center, and he intercepted McNab's call, choosing the officer as his next victim. Hildenbach took McNab hostage in his apartment and was about to force McNab to hang himself at gunpoint, but the officer was rescued by the Santa Barbara Police Force on a tip from Shawn Spencer. Hildenbach had them all at gunpoint and it was looking like Lassiter was going to have to shoot him until Shawn stepped up and told him that he should be pointing his gun at everyone because everyone could hurt him in this situation. After Shawn psyched him out a little more, Hildenbach was too distraught to concentrate and the cat jumped on him, disarming him. McNab received a cat from Shawn (formerly the pet of Mortimer Tilden, Hildenbach's third victim) as a wedding present.

In "Shawn Gets the Yips", McNab was critically wounded when a bomb went off in his mailbox, sending him to the Emergency Room. He managed to survive the explosion and returned to work later on, with a severe concussion, crutches, a missing eyebrow and a few missing toes.

In "Mr. Yin Presents...", McNab found the answer to the first clue, "Find Me." (the crossword) Later in the episode, McNab was drugged by Mr. Yang's partner, Mr. Yin's, who attacked him from behind with a syringe in a parking garage while he was trying to escort Shawn's girlfriend, Abigail Lytar, to the safety of the police station, worried that she might be the next victim.

Perhaps, the most vital evidence Buzz unearthed came in Santabarbaratown, showing Jerry Carp's involvement in the cover-up of the murder of Veronica Towne, a discovery which sent Shawn haring off to keep his father from confronting his old friend. Shawn couldn't do that, but did arrive in time to summon life-saving medical aid.

In "Deez Nups", it was revealed that McNab was working as a stripper at a hotel so he could make extra money to buy himself and his wife a new condo. McNab also revealed that he did not receive a plus-one to Lassie's wedding and therefore didn't bring his wife with him.

In "No Trout About It", interim Santa Barbara Police Department Chief Harris Trout fired McNab after he heard about his job as a stripper.

In "Shawn and Gus Truck Things Up", it was shown that Lassiter, as the new Chief of Police, had hired him back on as a police officer.

In "The Break-Up" Lassiter forces Betsy Brannigan to choose a Junior Detective. She chooses McNab, saying that although he has one of the lowest police test scores ever, she can shape him and turn him into Lassiter.

Buzz saves Shawn in "Psych: The Movie" by following El Proveedor around and causing all of Shawn's 'visions' to come true. 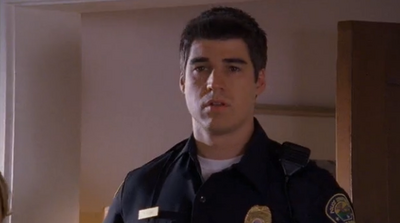 The gallery page for Buzz McNab can be found here.

Retrieved from "https://psychusa.fandom.com/wiki/Buzz_McNab?oldid=38170"
Community content is available under CC-BY-SA unless otherwise noted.