"Bounty Hunters!" is the ninth episode of Season Two. When an accused murderer goes on the lam, Shawn and Gus play bounty hunter and race to catch him before anyone else. However, the plot thickens when Shawn realizes the guy is actually innocent.

In 1987, a young Shawn and Gus are sitting outside of the police station waiting for Henry when they see a cool-looking guy in a leather vest bringing in a handcuffed perp. Henry comes out of the station and explains to Shawn that the guy is not a cop, but a bounty hunter – a "privately hired half-criminal operating outside of the law." Henry explains that bounty hunters are about money, not about justice or about arresting criminals the right way, with a badge.

In the present day, the Santa Barbara Police Department is on high alert. Dwayne Tancana, arrested for the home invasion robbery turned murder of Isabella Cole, escaped custody on his way to arraignment by head-butting Juliet as they rounded a corner. Now it's a full on manhunt, and to Lassiter's chagrin, the victim's husband has hired bounty hunter Byrd Tatums (the same bounty hunter Shawn and Gus saw in 1987) to ensure his wife's killer is found and brought to justice. Juliet is eager to get out there and correct her mistake, but unfortunately Lassiter has to bench her at the office, ensuring her he'll use every resource to find Tancana. Juliet takes him literally and calls in Shawn and Gus. Lassiter tells them they are only to locate Tancana and call them in. He's too dangerous for them to bring in themselves, he explains, and shows them pictures of Isabella's strangled corpse as proof.

Before they agree to take the case, Shawn asks Cole if they are eligible for his bounty money ($50,000), and while he's at it, envies his ginger-scented hair gel, Kangaroo Paste, which you can only get from Australia. Byrd tells them to stay out of his way. This is his last job, which will give him enough to retire on. Now Shawn and Gus have extra incentive to bring in Tancana first, not only to help Juliet, but also to beat Byrd, and while everyone else is checking routes out of town, Shawn knows Tancana will be lying low to avoid detection. They check with Juliet, who is watching a video of the escape, to see if Tancana has any relatives in town. On the screen, Shawn notices Tancana's wearing a medic alert bracelet and asks if he as a heart condition. Juliet confirms this and tells them that he has a cousin who's a short order cook at Marvin's diner, but that was the first place they checked.

Regardless, they head to Marvin's, a greasy spoon, to talk to the cousin who denies having seen Tancana. But Shawn notices a heart-healthy meal on the grill, next to all the melts and burgers, and deduces Tancana is actually there now. Just as they are about to grab him, Byrd show up and handcuffs him for himself. Tancana doesn't come quietly, head-butting Byrd and making a run for it. As Shawn and Gus jump in the Yaris to pursue, they find Tancana, already in the back of the car, having the same idea for escape. But on their way to take him back into custody, Tancana asks them to make a stop first and gives them directions. He needs to find his partner in the robbery, Gord Delbecchio, to prove he didn't murder Isabella Cole. They didn't make much from the robbery, but Delbecchio kept talking about a big score. Shawn and Gus refuse and take him back to the station, but before the cops can come out and take custody, Tancana has escaped, using his handcuffs to lock Shawn and Gus to the car.

However, Tancana's not gone for good. Shawn remembers the directions he gave and knows exactly where he's headed – Delbecchio's houseboat. They take Henry's boat out to find Tancana there, searching for evidence of his innocence. Shawn spots torn-up money bands and a necklace with a charm that matches the marks on Isabella's neck. While not conclusive proof Delbecchio murdered Isabella, it shows he was at least close to her body. Gus finds a cell phone, but the battery is dead so he pockets it to check later. Just then, shots ring out – Byrd has caught up with them again. They all jump into the water to escape, but Tancana is fast, steals Henry's boat and takes off.

They find Juliet, who has been scouring the case file to find anything that could lead to Tancana's capture. Shawn notices a picture of one of his tattoos. It looks like 'Barb,' which Gus figures could be the name of a girlfriend but Shawn realizes it's a bad prison tattoo and is actually 'Bar 13,' a local biker hangout. They once again track down Tancana, who is starting to believe Shawn's psychic, and agrees to let them out of the bar alive if Shawn will use his ability to help him track down Delbecchio and prove his innocence. With Byrd waiting for them at the Psych office, they take refuge at Henry's, where they plug in Delbecchio's phone. They are only able to retrieve part of a message due to water damage, but it's enough for Shawn to piece together a location – Meadow Parking Lot. When they get there, they find Delbecchio dead, but before they can investigate, Byrd arrives and spirits Tancana away.

With their only lead now being Delbecchio's body, they notice a distinctive smell on it. They have to get Tancana back and devise a scheme to offer Byrd more money than he'd get from Cole to return Tancana to them. They all meet up at the police station, where they make the trade for a briefcase full of pharmaceutical supplies, and give Juliet the collar. With Tancana finally back in custody, Shawn tells them they got the wrong man for the murder. Cole was the one who killed his wife. He had been thinking about it for a while and used the break in as a perfect cover up, easily pinning it on the robber, Tancana. But he was unaware of an accomplice, Delbecchio, who witnessed the murder, stealing Isabella's necklace as proof to blackmail Cole. When Cole went to meet him for the money drop, he strangled him instead. But Delbecchio fought back, getting Kangaroo Paste on his hands and therefore identifying his own killer. Cole tells them they have no proof, but Juliet tells him they will check the security cameras in the parking garage. When Cole says that there were no security cameras in the garage, he knows he has slipped up.

Shawn goes to see Juliet after the altercation and moves in to kiss her, but Juliet says it would be a mistake, so Shawn covers his tracks by claiming he was just "close talking".[1]

Juliet: How did you know that?
Shawn: Oh, it came to me, psychically. I just didn't have the energy for the whole hand-to-head thing... I was leaning in quite nicely here, so...

Shawn: What are you, the ambassador of rope etiquette? 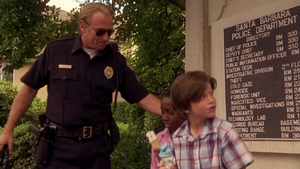 The gallery for Bounty Hunters can be found here. 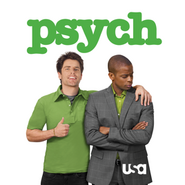 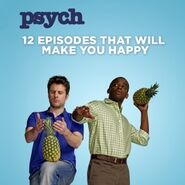 Retrieved from "https://psychusa.fandom.com/wiki/Bounty_Hunters!?oldid=37931"
Community content is available under CC-BY-SA unless otherwise noted.