John Landis
"American Duos" is the first episode of season two. When the latest incarnation of American Idol rip-off shows sets up shop at the Arlington Theatre, the requisite cruel British judge finds himself in a panic after a series of near-miss attempts on his life. Police protection has been barely sufficient and now he's taking matters into his own hands to ward of his inevitable attacker, hiring Santa Barbara's most reliable psychic detective to protect him.

American Duos, Gus' favorite reality show, has come to Santa Barbara. Even better, its cantankerous host, Nigel St. Nigel has not only been receiving death threats and has already survived a couple of attempts on his life. He needs protection and does not trust the police. He needs someone who can anticipate his stalker's next move, yet can blend in and not attract attention. Shawn already has the perfect idea. He and Gus will become contestants on American Duos.

After Nigel is forced to praise their hideous singing audition in order to let them into the competition, a stage light falls and nearly kills him. Shawn and Gus soon realize that since everyone hates Nigel, everyone has motive and because an attempt on his life was made in several different cities, it must be someone who travels with the show and is there every week. They meet some of the other contestants: a great solo singer named Bevin Rennie Llywellen, who sings both parts of his duo as his "hook," and a couple of cowboy brothers who seem more than a bit strange. Shawn suspects them all. Since chasing suspects is getting them nowhere, they go up to the catwalk to see if they can figure out why the light fell. Besides seeing Juliet secretly dancing along with a contestant, that tactic hits a dead end as well. They go see Nigel at his trailer who tells them they need to vastly improve or he can't carry them through another round. Shawn sees an exposed electrical wire and some water nearby stops Nigel in his tracks, avoiding him getting electrocuted.

Now they are no longer able to keep Nigel's brushes with death a secret and the police have to become fully involved. Lassiter wants to interview everyone who was there, which means all the contestants, including Shawn and Gus. After Lassiter kicks them out of the interrogation room, they recruit Juliet to help them improve their act.

Lassiter moves on to question the other judges. The first is judge Zapato Dulce. Lassiter has no recollection of him as Nigel never lets him speak. The other, Emilina, hates Nigel, was previous arrested for assault with a deadly weapon, and is completely out of it almost all of the time. Lassiter takes a hard tack with her, which she ends up finding attractive.

Shawn and Gus go back to Nigel's hotel with him. On their way to the room, Shawn spots discarded trays of room service. When they arrive in Nigel's suite, his standing order of a tuna sandwich is already there. But Shawn notices it doesn't look like the other food they just passed in the hall and realizes it's been poisoned, once again saving Nigel's life. The police sweep the room and find Emilina's prints and traces of her prescription drugs in the sandwich. Lassiter brings her in for questioning but when he realizes she's still out of it and starts coming onto him again, he decides to let her sit there and sober up before he renews his interrogation.

Meanwhile, back at the hotel, McNab brings Nigel store bought food. As he heats it up in the microwave, they both smell something burning, and McNab pulls Nigel to safety as the microwave explodes.

With Emilina in custody, this means they need a new suspect. Now that she's detoxed, she remembers someone going into her bag and getting her pills. She also says she wasn't at the hotel at the night in question. She passed out on a car in the parking lot. She says her fingerprints are in Nigel's room because the hook up every once in a while. Her story checks out and Lassiter has to release her.

Shawn and Gus take Nigel to Henry's house as a safe haven for the night. Needless to say, it doesn't go well. Henry wants him out but Shawn says he's still in danger as their lead suspect was just cleared. Henry suggests they focus on whom Nigel victimizes the most.

Back at the hotel, Emilina is attacked by a masked man and injected with an overdose of tranquilizers. Nigel now wants to cancel the show but the producer insists they must go on as scheduled. Shawn and Gus check out Emilina's room and Shawn spots something in the toilet - a charm from Bevin's necklace, one of the contestants they met earlier. It turns out Bevin has auditioned in every city, singing badly on purpose, to make sure he'd be passed on and could then follow the tour to every stop. He also is Zapato Dulce's biggest fan. Zapato was the first to be hired on American Duos. It was going to be his big comeback, but Nigel stole the show. So he and Bevin conspired to kill Nigel and make the show the Zapato vehicle it should have been all along.[1]

Gus: The extra T is for extra talent.

Nigel [sitting in Gus' car]: I feel like I've been incarcerated in a blueberry.

Nigel: This car makes me want to weep and then die.

Nigel: I feel like an angel baby swaddled in a cocoon of cloud candy 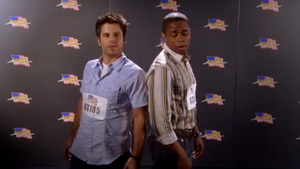 The gallery for American Duos can be found here.

Retrieved from "https://psychusa.fandom.com/wiki/American_Duos?oldid=30112"
Community content is available under CC-BY-SA unless otherwise noted.