"100 Clues" is the fifth episode of Season Seven and the one-hundredth overall episode of the show. Shawn and Gus attend a secret party at a historical mansion, hosted by an aging former rock-star, but when a murder occurs, all the suspects point fingers at each other.

It's 2007 and Shawn and Gus are backstage at a "Billy Lipps & The Guys Behind Me" concert. The second Billy gets off stage, Lassiter is there to inform him that the SBPD is bringing him in for questioning regarding the murder of Melinda Lane - a woman who was suffocated by a pillow at his mansion years ago. Billy's biography just came out and apparently there is information that points to Billy being the murderer. In that moment, Shawn and Gus urge Billy to somehow exonerate himself, but Billy has no explanation or alibi. He doesn't even remember what really happened that night. Lassiter has no choice but to arrest him.

It's present day at the Psych office. Shawn has been invited to an exclusive party via singing telegram. The party is being held at one of Santa Barbara's landmark mansions, "The Bella Rosa." Later that night, Shawn arrives at the party with Gus, and one by one, more guests start to show up. No one knows why they have been invited to the mansion until the host reveals himself - it's Billy Lipps, fresh out of prison after a serving a five-year stint for the voluntary manslaughter of Melinda Lane. Now that Shawn knows who the host is, Shawn starts to realize the connection between everyone invited to the party. Everyone in attendance was part of Billy's life before he went to jail. The people in attendance include Clizby, the band's cook/butler, Highway Harry, the band's manager, Martin Kahn, the man who wrote Billy's biography, and Leslie Ann, the band's former groupie turned nurse. Shawn and Gus are excited to see Billy, but also nervous; they testified at Billy's trial and were part of the reason why he was found guilty. But Billy shocks everyone when he reveals that the reason he's brought them there is to thank them. He says that jail has changed his life for the better and that he has never been happier or more clearheaded in his life.

Just then, lightning strikes causing the lights in the mansion to go out. When they regain power, they realize that Highway Harry is dead. The group thinks Harry died of natural causes, but Shawn has a different theory. Shawn notices that Rip the guitar player is missing from the party. From this, Shawn thinks Rip murdered Highway Harry and that Rip is somewhere in the house. Shawn posits that Rip killed Highway Harry because he stole Rip's music rights. Everyone in the house grabs some form of weapon and splits up to find Rip, the potential killer.

Later that night, Juliet and Lassiter show up at the mansion saying the missing person they've been trying to locate has been murdered and that the GPS on his car says he was headed to this location. They enter the mansion and learn that Shawn and Gus have been investigating a murder as well. But their investigation takes a turn when they realize that Highway Harry's body has gone missing and Rip's dead body is found in the walk-in freezer. Juliet and Lassiter then realize that the missing person they were looking for is Rip. Lassiter splits everyone up for questioning. After everyone is interrogated, Lassiter and Juliet say that the only info they could glean is that no one will admit to the murders and that everyone is pointing fingers at each other. Additionally, everyone mentioned there was a vast amount of dirty laundry aired during Billy's murder trial. It turns out everyone involved had some pretty damaging things to say about Billy.

From this, Shawn realizes that everyone in attendance testified at Billy's trial and therefore had a hand in putting Billy behind bars. Shawn presents a new theory; he believes Billy has brought them all there for revenge. However, his theory is quickly put to rest when Billy is nearly killed by a falling chandelier.

Later that night, a new guest arrives at the mansion. It's Billy's friend and fellow musician Curt Smith from Tears for Fears and he's been shot. Before he can tell the group who the shooter is, Curt passes out. Thankfully, however, Curt is going to be just fine because he only suffered a flesh wound. Shawn then theorizes that the killer is Leslie Ann, the groupie. Armed with a series of telling flashbacks, Shawn informs the group that Leslie Ann got pregnant back when she was the band's groupie and that one of the men in the room is the father. But since none of the men claimed to be the father of the baby and she couldn't compel them to take a paternity test, Leslie Ann was forced to raise her child alone without a father. And because of this, she decided to seek revenge on everyone who could have potentially been the father, by inviting them to the mansion and killing each of them. Leslie Ann says Shawn's theory is incorrect because she's known who the baby's father is all along. She reveals the baby's father is Clizby; but Leslie Ann never told Clizby about the baby because she thought the band would fire him.

Just then, Highway Harry enters the room, alive. It turns out he was just unconscious this whole time and not actually dead. Everyone is mystified. Highway Harry is alive and they still haven't figured out who the killer is. Juliet presents a theory; she thinks everyone had a hand in it. Equipped with a series of clue-related flashbacks from the night, Shawn tests this theory by going through each suspect, one by one, explaining who killed who and why.

But Clizby steps in and pokes holes in Shawn's theory. From this, Shawn agrees that the "everyone did it" theory is wrong, and he reassesses. Shawn knows that every suspect in the house has been eliminated except for three people: Clizby, Highway Harry and Martin. Shawn presents the following three theories to the group: Was it Clizby the butler who did it? Was it Highway Harry the band's manager who did it? Or was it Martin the biographer who did it?

As it turns out, it was Clizby the butler who was the murderer. For twenty-five years, Billy Lipps and his crew stole the snazzy tunes the Clizby whistled and turned them into hit songs - without paying him. In his anger, he smothered Melinda Lane and pinned it on Billy, which resulted in prison time. But then, Rip started to piece things together, and when he confronted Clizby, he was murdered. Clizby went to dispose of the ice-pick, but saw rock-legend Curt Smith walking up the drive way and shot him. He also loosened the screws on the chandelier directly above Billy's favorite place to sing.

Billy Lipps remembered too many details about the night of the murder in his biography when he couldn't even remember an entire decade: Martin Kahn did it. He was in love with Melinda Lane, but she only had eyes for the band, and he wasn't willing to lose something to the band. He then added things into Billy's biography that pointed all evidence to him. But Rip managed to piece things together and when he confronted Martin, he was murdered. Martin went to dispose of the ice-pick, but saw rock-legend Curt Smith walking up the drive way and shot him. He also loosened the screws on the chandelier directly above Billy's favorite place to sing.

After the police have arrested the murderer, the paramedics arrive to take Curt to the hospital. As they wheel him away on a stretcher, they hear Billy's pet panther Emma coming and they rush back inside, leaving Curt Smith to be mauled. 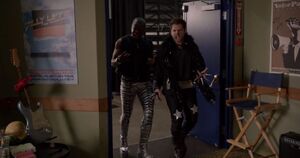 The gallery for 100 Clues' can be found here. 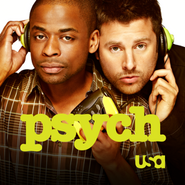 Psych: The Complete Collection
Add a photo to this gallery
Retrieved from "https://psychusa.fandom.com/wiki/100_Clues?oldid=36979"
Community content is available under CC-BY-SA unless otherwise noted.